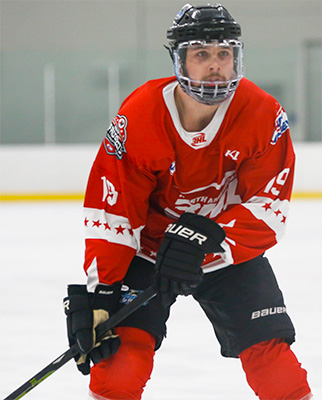 Willmar 3 @ Alexandria 5 – Down by one after 20 minutes, the Blizzard responded in a big way through the final two periods, outscoring the Warhawks 4-1 to ultimately snatch a 5-3 win on Friday. Carter Rieland and Caleb Strong carried the flag with two goals apiece, joining Matthew Thompson on the scoresheet for Alexandria. Nikolai Rajala also starred for the Blizzard, setting up three goals, including the game-winner. Tyler Corbid, Michael Sweetland and Jack Willis put Willmar on the board in front of 31 saves from Cooper Olson, but Joey Greilich’s 26 stops took the win for Alexandria.

Peoria 2 @ Oregon 6 – Parker Severson (3g,1a), Sam VanderHoeven (2g,3a) and Jacob Best (5a) were absolutely unstoppable on Friday night, carrying the Tradesmen to a dominant 6-2 win over the Mustangs at home. Dylan Dent also lit the lamp for Oregon, as Hunter Adams stood tall in net with 27 saves. Reid Lune grabbed both Peoria markers, while Brendan Donovan and Cole Walter combined for 20 Mustangs saves.

New Jersey 6 @ Danbury 2 – The Titans rode a pair of George Haigley goals and 36 saves from Ethan Kavanaugh to a 6-2 win over the Jr. Hat Tricks to stay perfect in the young season. Nick Byron, Kyle O’Neill, Colin Driscoll and Brett Bell also found twine for New Jersey, while Luke Dube and Brandon Cope put Danbury on the board. Alex Fernandes put in a solid shift between the Danbury pipes as well, with 23 saves on the night.

TX RoadRunners 0 @ Oklahoma City 6 – Fueled by a four-goal third period and a 19-save shutout from Jacob Ahl in net, the Blazers kept their hot start to life in the NA3HL going with a 6-0 win over the RoadRunners on Friday. Artem Korolev and Hunter Warner each lit the lamp twice, with Ben Mullen and Tristan Warr chipping in a goal apiece as well. Texas goaltender Aidan Rudolf stopped 33 pucks in the loss.

North Iowa 4 @ New Ulm 1 – The Bulls raced out to a 3-0 lead and never looked back in this one, cruising to a 4-1 win over the Steel thanks in large part to two Sota Isogai strikes and 31 saves from Evan Babekuhl. Lucas Jorgenson and Jac Triemert also scored for North Iowa, while reigning West Division Star of the Week Joey Gimberlin put New Ulm on the board. Zac Hattan stopped 38 shots in the Steel cage.

Atlanta 7 @ Mid Cities 0 – The Capitals’ first game of the season was an impressive one, as two-goal efforts from Andrew Raburn and Eddie Slack as well as Greg Smith’s 15-save shutout in net helped them steamroll the Stars 7-0 in Euless. Kirill Nikulichev, Liam Moore and Nicholas Cyprian rounded out the scoring in this one, as Mid Cities goaltender Nahuel Veyan faced a 57-shot barrage, stopping a respectable 50 pucks despite the loss.

Yellowstone 6 @ Bozeman 4 – A back-and-forth tilt in Bozeman ultimately went the way of the visiting Quake, as they toppled the Icedogs 6-4 on Friday night. Dylan Rumpke led with a pair of goals and a helper on the night, flanked by Cade Rosansky with three assists, Jack Harris with a goal and two helpers and Will Sobaski, Ethan Gicewicz and Coby Nostrant with individual strikes of their own. Luke McKay led the charge for Bozeman, scoring two and assisting one, while Eric Thompson and Tae Evans fleshed out the Icedogs’ scoring. Hudgel Selk’s 30 saves earned the win for Yellowstone, while Evan Wittchow fell just short for Bozeman despite 33 saves between the pipes.

Gillette 0 @ Great Falls 3 – Trever Mellen was the story in this one, stopping 35 out of 35 shots against to backstop the Americans to a comfortable 3-0 win over the Wild. Cole Komarek, Micah Serino and Alex Jackson provided the offense in this contest, while Gillette netminder Liam Scott faced down 34 pucks in the loss.