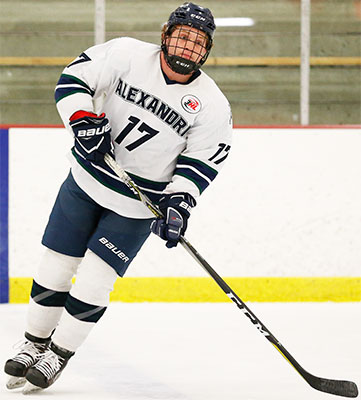 The Alexandria Blizzard of the NA3HL are pleased to announce that forward Brandon Connett has committed to play NCAA Division III hockey for the University of Wisconsin-Stout.
Connett, 20, in his second and final season playing in the NA3HL for the Blizzard. The 6’0/195 lbs. native of Baldwin, Wisconsin, currently leads the Blizzard in scoring so far during the 2019-20 season with 23 points (13 goals, 10 assists) in 12 games played.
Overall in 58 career NA3HL games, Connett has recorded 67 points.
“We as a Blizzard organization are very proud and excited for Brandon and his opportunity to pursue hockey and his education at UW-Stout,” said Blizzard head coach Jeff Crouse. “Brandon is a leader of our team on and off the ice and also in the community. He’s always smiling and enjoying himself and that translates to his success on the ice. We wish Brandon nothing but the best and look forward to seeing him grow and develop as he pursues his career.”
Connett is another example of the ladder of development as he previously played in the NAPHL prior to playing in the NA3HL and earning his NCAA commitment. During the 2017-18 season, Connett played in the NAPHL for the Sioux Falls Power 18U team, where he recorded 12 points in 18 games played.