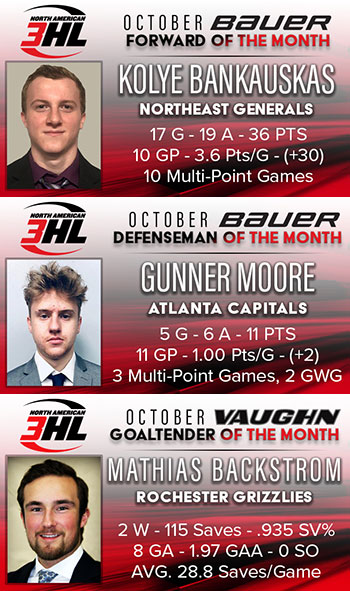 The League’s leading scorer set the ice ablaze in October, posting at least two points in each one of his 10 games throughout the month. In total, Bankauskas tallied a whopping 17g-19a—36 pts to extend his season total to 26g-25a—51pts in just 16 games. Bankauskas also nabbed three hat-tricks last month, en route to four games with at least four points. The forward carries a now 13-game point streak into November as he looks to build on his remarkable start.

Moore and the Capitals saw home ice just once in nine games during October, but the blueliner’s offensive talent shone through just the same. Opening the month with a six-game point streak, the 6-foot-1 Moore failed to hit the scoresheet just once during the month, and bagged three multi-point games in his final five October outings. Moore also came up clutch for the Capitals, netting two game-winners on Oct. 12 and Oct. 13, and bagged his first two-goal game of the season on the 13th.

Backstrom started four games for the Grizzlies against tough competition in October, splitting the set but posting a .903 save percentage or better in each game. After starting the month with a tough loss to the Chill in which he gave up three goals, Backstrom stepped up in a big way, stopping 26 of 27 pucks in a win over Peoria and 34 of 36 to stymie high-powered Granite City. The Lumberjacks forced Backstrom into 27 saves as they took the rematch, but the Swedish net minder capped off his month with 115 saves in just three starts, along with a .935 save percentage and stingy 1.97 GAA.