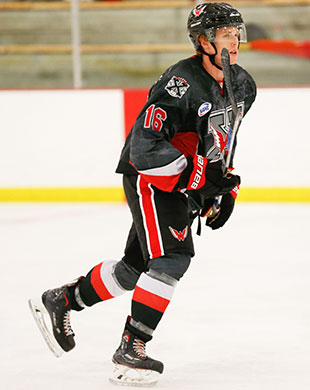 Ladder of Development: Aberdeen Wings defenseman Jack Powell made his junior hockey debut in the NA3HL and spent time with the Alexandria Blizzard prior to playing in the NAHL for the Wings.

The Aberdeen Wings, proud members of the North American Hockey League (NAHL), are pleased to announce that defenseman Jack Powell has committed to play NCAA Division 1 hockey for Bemidji State University in the WCHA.
Powell, 20, is a 5’11/181 lbs. right-handed defenseman from Alexandria, Minnesota. He is currently in his second season with the Wings.  So far in his NAHL career, Powell has played in 23 games, scoring two goals and adding 10 assists for 12 points with a +16 rating.
“Jacks commitment to improving his game this offseason has given him the ability to become a Division 1 hockey player.  He is a high character young man that is a true leader in the locker room, and is very respected by his teammates.  Jack was a huge piece to last years Robertson Cup National Championship, and I believe he will be a huge addition to Bemidji,” said Wings Head Coach Scott Langer.
Bemidji State University is located in Bemidji, MN.  They currently play in the WCHA.  The Beavers are 0-0-2 so far this season with two ties vs. St. Cloud State Huskies.  Last season the Beavers had a 15-17-6 overall record.
“I want to thank everyone involved in the Aberdeen Wings Organization.  Being a part of this family has changed my life and I couldn’t be more appreciative of everything they have done for me.  And a special thanks to the coaching staff for believing in me and working with me through out this entire process,” said Powell.
Powell is a ladder of development success story. While playing for Alexandria High School in Minnesota prior to his NAHL stint, his made his junior hockey debut in the NA3HL with the Alexandria Blizzard during the 2016-17 season. He also played for the Blizzard during a part of the 2018-19 season. He 20 career NA3HL games with Alexandria, Powell registered nine points.
Click here for an updated NAHL to NCAA commitment list