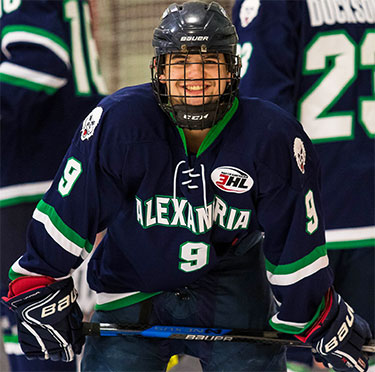 The Alexandria Blizzard of the NA3HL are pleased to announce that forward Brett Meister has committed to play NCAA Division III hockey for Saint John’s University in the MIAC.
Meister, 21, has spent the last three years playing for the Blizzard in the NA3HL. The 5’7/150 lbs. native of White Bear Lake, Minnesota, was the Blizzard’s leading scorer during the 2018-19 season, recording 63 points (24 goals, 39 assists) in 40 games played.
Meister was also selected to and played in the 2019 NA3HL Top Prospects Tournament for the West Division team, where he had three points in three games played.
Overall in his three-year NA3HL career, Meister recorded 129 points in 119 career NA3HL regular season games.
“We are very happy as an organization to see Brett continue his hockey career and pursue and education. Brett developed into one of the best players in the NA3HL and will probably go down as one of the most popular players in Blizzard history.  Congrats to Brett from the entire Blizzard organization,” said Blizzard head coach Jeff Crouse.
“I would like to thank the Blizzard organization for the past few years for developing me on and off the ice. I am very excited to join an awesome hockey program like Saint John’s,” said Meister.