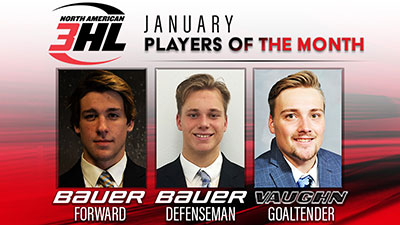 Padgeon may have seen his league scoring lead vanish in January, but still boasted a stout 24 points in just seven games during the month. Averaging over a goal per game, Padgeon found the scoresheet in each of his seven outings, posting a stout five points in four of those and hat-tricks in two. Padgeon’s shining moments came at the end of the month in a pair of tense tilts against Northeast, during which the forward bagged back-to-back game-winning goals as part of a six-point outburst across the weekend. Including an assist in his first matchup of February, Padgeon has now logged 41-54—95 in 38 games this season, good for second among NA3HL skaters, with his seven GWGs sliding up into second place as well.

No team was hotter than Coulee Region during the month of January, with 14 Chill skaters featuring in the top-25 NA3HL scorers last month. De Schepper led all blueliners in that span, posting an 11-game total of 3-25—28 with eight multi-point efforts. De Schepper logged back-to-back three-point outings to kick off the month, before recording his first six-point night of the season to cap off that weekend. The Belgian blueliner closed out his month in style as well, bagging two or more points in each contest during a five-game point streak leading into February. De Schepper has now potted 6-54—60 on the year, good for third in the NA3HL.

The Blizzard skyrocketed into playoff position in the West Division thanks to an 8-1 record in the month of January, riding an incredible run of five wins in five starts from Kyle Hayden. Four of those five wins came against opponents ranked higher than Alexandria at the time – including a key overtime win over top-ranked Granite City. In total, Hayden logged 130 saves on 135 shots, allowed no more than two goals in any game and posted two shutouts last month. He finished January with a .963 save percentage and 0.99 GAA, both of which rank third among goaltenders with three or more starts in that frame.